However, it is recommended by the FDA, especially in preparing food, to prevent the spread of diseases.

It is even recommended by the CDC that workers have to thoroughly wash their hands using water and soap once they remove their gloves.

According to the National Restaurant Association, only 50 percent of fast food workers wear gloves.

But another study by the University of Toronto reported that about 25 percent of the workers only wear work gloves when handling food.

Those are just some facts you should know, and there is so much more about it.

Read below as we tell you everything about whether or not fast food workers are supposed to wear gloves. Keep reading!

The Pros and Cons of Wearing Gloves While Working

Generally, the owners of fast food restaurants would also require gloves for their employees when handling food.

But there can be some exceptions. For example, wearing gloves is only required when a person will handle raw meat.

Some restaurant owners require this while others do not work for the reason that the wearing of gloves can come with some advantages and disadvantages. So, are fast food workers supposed to wear gloves?

#1. Prevents the spread of illnesses

Although using work gloves does not eliminate the possibility of food contamination, it does, however, prevent it.

A study states that workers with gloves are less likely to carry bacteria on their hands as compared to those without gloves.

To practice proper sanitation, the food workers must also wash their hands using water and soap after removing their gloves.

Keep in mind that there is a proper way how to safely remove disposable gloves.

As recommended by the Disease Control and Prevention Center, fast food workers need to change their gloves after every four hours.

They should also change them when the gloves become soiled.

It is disappointing that about 17 percent of the workers only change their gloves often.

When all the crews are wearing gloves, the customers automatically think that the business operation prioritizes cleanliness.

With the food service crews wearing gloves, people would sense that the food they eat is handled safely. It is safe from contamination.

This is something that will give a positive perception of the restaurant.

Restaurant owners strictly practice this even without the mandate of state laws, for that matter.

Customers are more concerned with their health due to the ongoing pandemic. So it is best to leave a positive outlook to them to earn their trust.

Aside from protecting the food against direct contact, it also protects the workers’ skin against irritants. 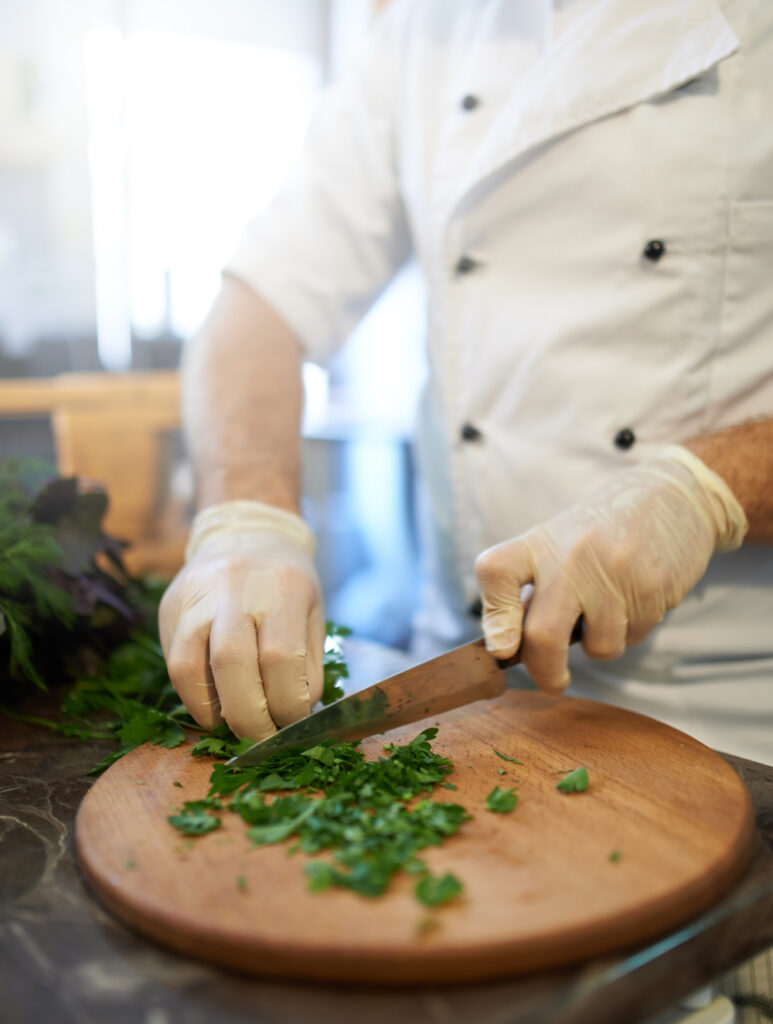 Gloves are also a big help in preventing infections, burns, and skin cuts.

As far as food safety is concerned, gloves would facilitate easier food handling in a particular scenario.

For example, the chef can prepare the orders easily when preparing sushi. This will also prevent the transfer of allergens from one ingredient to another.

Some gloves are designed to pull warm taffy or peel-roasted peanuts.

With gloves, people automatically assume that the food is safe. But improper glove use can result in a bigger problem.

Since they are wearing gloves, they might not wash their hands anymore, which can be alarming.

Remember that the gloves will not protect the food completely against contamination if the hands underneath them are dirty.

Some gloves allow you to grip things better, but others reduce dexterity.

How you hand food items would feel different if you used your bare hands.

Other than that, there may also be higher risks of injury in instances where you are using sharp knives as you cannot hold them well.

The risk of food contamination would be higher with gloves. That is because there can be a moist environment within the gloves. 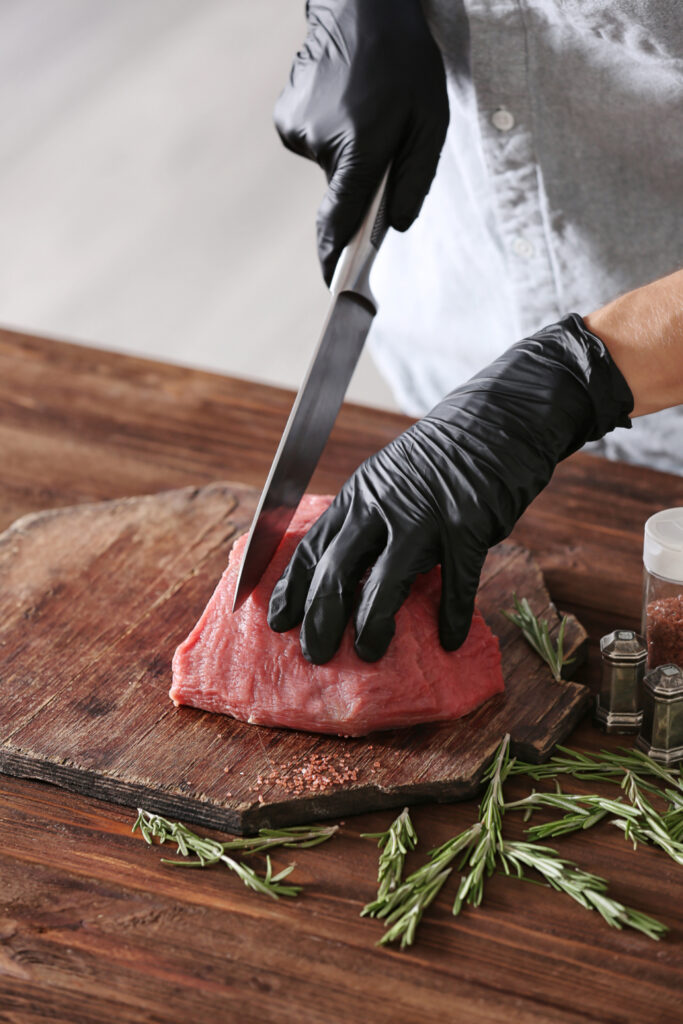 In fact, this is where bacteria can reproduce. It will serve as their factory.

Some gloves are also designed with pinhole leaks which you can detect easily before use. This can increase the chances of food contamination.

Since you cannot reuse or recycle food service gloves, wearing gloves when handling food can be costly.

Commonly, those gloves are made out of non-renewable materials.

Question #1. How many times Should fast food workers change their work gloves?

This question has no definite answer as it often varies depending on the establishment’s rules and the worker’s specific duties.

But generally, it is advised for fast food workers to change their food service gloves regularly throughout their entire shift.

This is particularly true if they handle varying food items. They also need to change their gloves if they are soiled.

The same is true if the worker has touched any possible contaminants.

Question #2. What can happen if they don’t wear gloves?

Not wearing gloves can increase the risk of skin cancer, dermatitis, and other diseases.

This is particularly true if the worker is exposed to hazardous materials.

There would also be an increased risk of respiratory problems like asthma and other respiratory issues.

Question #3. What kind of gloves are required or recommended for fast food restaurant use?

There is a variety of gloves available for fast food restaurant use. One of which is disposable gloves.

These are the type of gloves that are made of plastic. They are designed for one-time use only, so you must dispose of them after each use.

Typically, disposable gloves are used to hand raw meat and to clean up spills.

If you opt for this type of gloves, you might be interested to know what are the benefits of disposable latex gloves.

Another type of gloves used in restaurants is reusable gloves. These are thicker materials, and you can use them multiple times.

Question #4. How can fast food workers help prevent the spread of diseases by wearing gloves?

Some things can be done by fast food workers to help prevent illnesses while wearing gloves.

For one thing, you must thoroughly wash your hands before wearing gloves.

Doing so can help remove anything from your hands that might be transmitted to the food and contaminate it.

Avoid touching your hair or face as much as possible when you are wearing your gloves.

This is to prevent the transfer of viruses or bacteria to your face.

Question #5. What is the proper way of cleaning your hands before wearing a pair of fast food gloves?

The general rule is to ensure that all bacteria, viruses like Covid-19, and dirt are removed from your hands.

One effective way of cleaning your hands is using antibacterial soap. This is formulated to kill off bacteria.

You can also clean your hands using sanitizer. Apply a sufficient amount of sanitizer is good at killing any bacteria present in your hands.

But along with that, they also need to practice proper hygiene and sanitation. Otherwise, it can lead to a more severe problem.

So that’s pretty much it for today!

Whether you are a fast food worker, restaurant owner, or customer, we should all be aware of the potential health concerns associated with wearing and not wearing gloves.

Last Updated on 1 month by digirock