In general, boxing gloves can be secured through the help of velcro or lace-ups. With velcro, the velcro would serve as the second layer of hand wrap. It would provide more stability to your wrist. The lace-up gloves, on the other hand, gives you a more secure and snug fit. However, you would need help when putting it on. You would need to have it wrapped it up with tape before your match. The lace-up gloves can be converted using loop converter and a hook.

There are three kinds of padding that’s used in making boxing gloves: foam padding, horsehair padding, and a mixture of both. Horsehair padding is environmentally friendly and lasts longer, however, it provides less protection. Foam padding, on the other hand, is a combination of latex and PVC foam. It gives the user better protection since it has a shock absorber.

For amateur boxing matches, boxers are required to use red or blue boxing gloves that come with a white “scoring area” in its knuckles. The scoring area aids judges in seeing and recording points during the match.

You can wear boxing gloves over your hand wraps. This helps stabilize your fist against any injury. Hand wraps are generally made from cotton and come in 3.5 m and 4.2 m sizes.

How Do Boxing Gloves Work?

In my experience, boxing is fairly restricted when it comes to the movements you can make. You can only use your fists, which means that there’s a huge chance of getting hit on your head or body. Boxing was a more dangerous sport before the modern rules were implemented. People back then used to fight with their bare knuckles, which means that boxers more prone to cuts and broken bones. Boxers also used dirty tactics such as eye gouging and foot-stepping.

Gladly, with the help of boxing gloves, a lot of issues have been solved. Boxing gloves fit around your hand and forming a fist shape. It provides a layer of protection on your hands and fingers. The padding helps to reduce the intensity of the punches’ impacts to the hand of the boxer and the body and head of the opponent. Boxing gloves increase the safety of the participants.

The impact of punches have on injuries is not entirely removed. Boxing gloves’ added protection allows boxers to punch harder, which means that even with the cushion, the impact of a punch is still great. In fact, plenty of boxers from the “Golden Era of Sport” are now suffering from brain injuries or mental illnesses. Fortunately, people nowadays have put more importance on protecting boxers.

During competitions, smaller boxing gloves are being used, while heavier padded gloves are used during sparring and training.

What Are The Different Types Of Boxing Gloves?

Whether you have been boxing for a very long time or is only planning to start boxing, you may have noticed that not every boxing glove is the same. I’d like to tell you that there are plenty of variations than anyone would expect. Every style of gloves has its own uses. To explain this further, I’ll give you a run-down of the different types of boxing gloves:

In my experience, I often find brands that advertise their boxing gloves as bag gloves or training gloves. These gloves are basically your all-around boxing gloves.

Bag boxing gloves are meant to be used when punching a bag or a pad. They’re typically useful and versatile and can be used in any kind of training. For the most part of your boxing regimen, you’ll be using bag boxing gloves. You have to remember, however, that not every general-purpose glove is a training glove.

When sparring, the decision on whether you should wear gloves lies on your coach. It’s my advice that you listen to your coach, no matter what you want, since he/she has more experience than you.

Sparring gloves and training gloves are almost the same. The difference between the two is that there’s more cushion with sparring gloves enabling better distribution of the impact of your punches. You can often find sparring gloves of different weights, however, it’s my advice that you only use a pair that’s more than 14 oz.

You can ask your coach on what weight you should use since the weight of the gloves depends on your body weight. Also, I advise you to buy a pair of gloves from a respectable brand. If you can afford it, avoid buying a second-hand pair.

Amateur competition gloves are meant to be for amateur competitions and generally given to boxers for promotion. They typically come in red or blue, depending on which corner you are in. The knuckle area of the gloves is generally highlighted, helping the judging score the fight better.

If you’re not planning on professionally competing in the ring, you may not end up using professional gloves. As its name implies, these type of boxing gloves is meant to be used only in a professional competition. In general, they offer less protection and comfort to your hands. This is because it aims to maximize the offense of its user.

With professional gloves, the padding is firmer than other gloves. It’s also more compact and smaller, enabling you to move your fists faster. The main goal of professional gloves is to let the boxer deliver a sharper blow with each of his/her punch.

Professional gloves are not meant to be used for training and shouldn’t be used by anyone outside of competition.

In general, professional gloves weigh 8 oz or 10 oz. Most pro gloves are lace-up since most competitions do not allow Velcro boxing gloves.

I advise you to avoid buying Professional boxing gloves that are sold cheap in the local sports stores. They’re usually basic training gloves since real professional gloves are expensive.

Back then, boxing gloves were usually made of big bubbles of padding. Mexican style gloves are very unique and different compared to the padding they used in the early days. They’re sleeker and tighter.

Plenty of people know, especially boxers, know of Cleto Reyes. They’re one of the top glove manufacturers. I, for one, is a fan of the brand. The company produces Mexican style gloves. They’re usually more fitted to the boxer’s hands and is often more compact. They’re meant to mold to your hand, giving the user a superb fit. Cleto Reyes still uses horsehair for their paddings and goat skin for its outermost layer.

Most gyms will never allow their boxers to use these gloves. However, plenty of sports stores still sell them. Oftentimes, they come as a freebie with punching bags. I personally recommend you to avoid using it if you can.

Traditional bag gloves are often generic in shape. Its padding is minimal and does not provide wrist support. 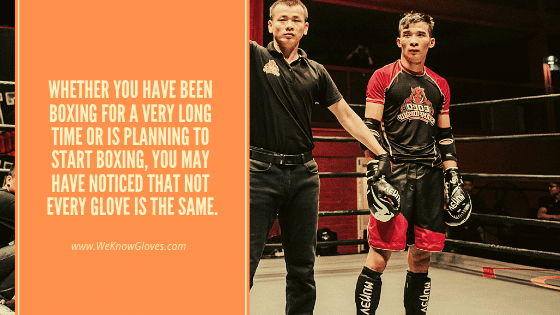 What Do You Need To Consider When Picking The Right Boxing Gloves?

When I first started, I’ve had difficulties in picking which gloves should I purchase. This is why I have created a list of the different considerations that I made to pick the best pair.

Are the gloves you’re buying going to be used for training or competition?

As we have mentioned earlier, training gloves and professional gloves are very different from each other. You can’t interchange the two and expect them to yield the same results.

During a competition, what is your weight class and what is the glove weight requirement for your class?

Every person weighs differently, thus every person must wear gloves specifically meant for his/her weight. Wearing a pair that’s not meant for weight class may result in you getting injured.

During training, where will you use the gloves? Will you use it for bag and pad work, for sparring, or for both?

Sparring and bag and pad work require a different type of padding. This is why picking something that can fit your needs will greatly protect you from any injuries.

Are you planning to purchase a pair for your specific needs or a pair for all of your needs?

It’s my advice that you buy a different pair for sparring, pad work, bad work, and general training. This will prevent your gloves from getting worn out easily. Worn out gloves will give you more problems than the financial toll of buying specific gloves.

What Are The Different Boxing Gloves Sizes?

As I’ve mentioned earlier, wearing the right pair can protect you from possible injuries. Here are the different gloves sizes and what are they are used for:

Boxing gloves of this size are meant to be used by young athletes. People weighing 45 kg or less can wear these gloves.

This size is meant to be used only for competing and fighting. They’re typically small on adults and are reserved for contact fights. Women and youths are usually the ones who use gloves of this size. If you weigh 45 kilograms or less, you can use them.

It’s a practical adult glove of the smallest size available on the market. It’s great if you’re punching pads or heavy bags. You can wear a pair of this size if you are looking to sharpen your techniques. I recommend you to use gloves of this size before competing. People weighing 45 kg to 67 kg can use this.

Gloves this size are commonly used for light sparring or hitting pads. It’s also great when you’re drilling with a sparring partner. If you want all-around gloves and weight 45 kg to 67 kg, then this size is best for you.

Gloves this size is mostly used for sparring. If you’re looking to purchase an all-rounder pair, then this size is for you. It’s suitable for hitting pads and free-sparring. They’re generally lighter than a pair of 16 oz size, which makes them better at throwing fast-paced punches. If you weigh 68 kg to 79 kg, then you can use this size.

This size is best used when you’re looking for heavy sparring. If you have big hands and is over 80 kg, then these gloves are best for you. They’re bigger and much safer to use since they have more padding.

At The End Of The Day

Picking the best pair of gloves is necessary for ensuring that you and your opponent are safe. You shouldn’t just pick up the first pair that you can find. Taking the time to understand the different kinds and sizes of gloves is crucial if you want to hone your skills. Boxing is a fun sport and has plenty of benefits, however, it’s also dangerous if not done properly.

With the information I gave you above, you should be able to pick the best boxing gloves for what you need. If you are still unsure, it’s best to consult your coach. The information we gave is only indicative, which means that it’s best to get professional advice.

Share This
We use cookies to ensure that we give you the best experience on our website. If you continue to use this site we will assume that you are happy with it.Ok