Are you one of those people who wonder how touch screen gloves work? Usually, they are made of conductive materials on the palm and fingertip area.

This allows you to use your gloves without the need to take them off your gloves. Today, mobile phones have become a staple part of our daily lives.

On average, a person touches his or her phone about 2,617 times daily.

So having touch screen gloves would be essential to keep doing what we do on our phones.

Commonly, touch screen gloves are used on touchscreen devices such as tablet computers, HMIs, and smartphones.

This type of gloves looks like regular gloves, but the only thing that makes them unique is their touchscreen technology.

I know you are interested in the science behind these gloves. As such, let us delve into this further below.

How Touch Screen Gloves Are Made?

On average, a person spends about three and fifteen minutes per day using their phone.

According to 67 percent of the population, they could not spend more than one day without their smartphone.

About 1 out of 3 people would feel anxious if their phones were not with them.

Well, some touch screen gloves are integrated with unique conductive yarn. They are woven into the fabric.

Other gloves have conductive threads that are sewn into the fingertips. 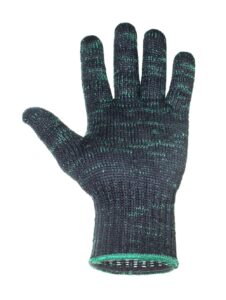 Below, we will tell you how you can do this to make gloves touch screen compatible.

Some other gloves are designed with special conductive fibers. They are also women on the tips of the fingers and on the palm area.

This will let you interact with your touch screen devices without the need to take off your gloves.

In terms of the material used for this glove, it can vary.

The most common ones are made of cashmere, wool, and leather. Some latex gloves work with touchscreens too.

How A Touch Screen Glove Works?

As a result, you can participate more and document things easily. You can find them in two variants.

The first one is resistive. With this, you must push the screen hard enough to react. For instance, you can press a button or leave a mark.

You can also use a stylus for singing on your devices. If you do not have a stylus, you can use anything pointy and hard. But they may not work well.

The type is a capacitive touchscreen. This is the most common one. It will react to any touch holding an electric charge.

The most common source of electrical charge is the human finger. But with your gloves, you cannot touch the screens.

This is where the idea of capacitive touchscreens came from. They are designed with this in mind.

The majority of modern devices utilize capacitive sensing in picking up a touch.

Suppose you touch a device with capacitive technology while you wear your touchscreen gloves.

In that case, the conductive fingers will absorb the electricity. In other words, the reaction would be the same when you use your bare hands.

Users check their smartphones about 80 times a day. This can include up to 2,617 touches every day.

With so much contact between the skin and the screen, your skin can become dry and irritated. It can also cause premature aging.

With that being said, it is often beneficial to wear touchscreen gloves. It will give you double protection against irritation and against cold.

Manufacturers design touch screen gloves to protect the hands against the screen and elements.

Now, if you do not have a pair of touch screen gloves, do not worry because you make your ordinary gloves touch screen compatible with a few steps.

As mentioned earlier, most touch screen devices these days use capacitive technologies. So we will make your gloves capacitive sensitive.

We will put some conductive threads between the finger and the screen. That said, you need to know how to do some stitches.

But before getting into that, you have to prepare the things that you will need for this project first,

Of course, you will need a pair of gloves, a needed, and a 30-centimeter-long conductive thread.

You may buy the whole spool or just get a few meters so that it would be more affordable.

To start with the stitching, you need to thread the needle first. Remember that you do not need so much thread. About one foot or more will suffice.

Start sewing a couple of stitches on the fingertips of the gloves. On the interior of the gloves, try making the stitches so close.

This ensures that only a tiny portion of the fingertip will touch the screen. About 6 mm or one-fourth inch in diameter would be ideal.

With this, your finger can touch the screen more accurately. But also avoid making it so small. If you own an iPhone, it tends to ignore small touches.

If your touch screen gloves do not work well, you can try increasing the stitching outside your gloves.

It’s OK, even if it gets messy from the inside. The stitches should range from 3 up to 5.

This step ensures that the thread inside the gloves will touch your hand or finger from the inside. As such, you need to leave an extra.

You can leave some threads dangling on the knots. Or you can tack a tiny portion to the glove lining.

This step is optional. You can repeat the entire process above on the other fingers that you are using in touching the screen.

For instance, if you worked on the index finger earlier, you can now move on to the thumbs or middle fingers.

That’s it. You can then try putting on your gloves and using your iPod.

To add to what you have learned today, let us answer some of the most commonly asked questions about touch screen gloves below.

This will be quick, so read until the end.

#1. What are the benefits of touch screen gloves?

There are a lot of benefits that come with using touchscreen gloves. Obviously, it allows you to use any touchscreen device without removing gloves.

You can keep your hands warm inside the gloves during cold weather while using your tablet or android phone.

This will come in handy in various situations. For instance, when you check the location when driving.

Another benefit is dexterity. With your gloves, you can grip your devices better.

Finally, touch screen gloves will protect your skin and screen as well. There will be no smudges and fingerprints on the screen.

Your skin will also be free from irritation and dryness.

#2. What is the drawback of touch screen gloves?

These touch screen gloves also come with a fair share of drawbacks. For one thing, they may not be conducive.

In other words, you cannot use them on your touch screen devices. Even those conductive gloves might not work well with other devices.

That is because the gloves may interfere with the ability of the screen to detect touch.

Another problem is that some touch screen gloves may cause your device to become less responsive.

Lastly, your love may lead to smudges or marks on the screen.

#3. What is the future of touch screen gloves?

Touch screen gloves have great potential in the future.

Some trends include having more sophisticated gloves with more features and better materials.

These touch screen gloves may become more widely known since people rely on their screen devices.

Of four people, one admits that they are addicted to their smartphone. About 52 percent of the population would sleep with their phones.

Another trend is that gloves will cost less as the company’s production costs diminish. This can be treated as an advantage on the part of the buyers.

Buying touch screen gloves at lower prices would benefit them as they can save.

They can also buy more pairs to ensure that their hands will be kept insulated when typing on their keyboard.

#4. How to store touch screen gloves?

Before storing your gloves, you must first wash them with mild soap and cool water.

Remember not to machine wash your gloves. Do not put them in the dryer as well. Or else the unique material on the fingertips will be damaged.

After washing, lay your gloves to dry. When it is completely dry, you can store them in a cool, dry place.

#5. How can you troubleshoot your touch screen gloves?

You can do a couple of things to troubleshoot your gloves with their touch screen compatibility does not seem to work.

First, check if your gloves are compatible with your device.

Keep in mind that not all touch screen gloves may be compatible with your blackberry, tablet, or windows laptop.

You should also ensure that your gloves are clean.

In some instances, the gloves do not work because some dirt or other particles interfere with your gloves’ ability to work with a screen.

You can also try another pair of gloves if the one you use does not work. This is the last option that you can resort to.

It is good that you already understood how touch screen gloves work.

Now, more than ever, mobile phones and other touch screen devices have become a staple part of our daily lives.

Do you know that about 1 in 10 breakups happen via text? Also, 1 in 10 people checks his phone in the middle of the night as if it has become a routine.

With touch screen gloves, we can do anything we want with our devices without the need to take off our gloves.

So that is all for today. Hopefully, we have provided you with enough information which feed your curiosity about touch screen gloves.

Thank you for being here today! See you in the next post.

Last Updated on 3 months by digirock